Wonder what I’ve been eating?

I have a website dedicated to documenting meals created from my garden.  You can find it here:  Photos from the Garden Table

“Like a good neighbor…” tonight it wasn’t State Farm, but my garden that was there.

I had planned to make a salad using leftovers, including a giant bag of pre-washed, pre-cut kale.  I’ve resorted to these resource-guzzling bags of greens trucked in from who-knows-where in an effort to keep up our healthy greens intake during the off-season.  I’m so glad THAT is coming to an end.  And hopeful I won’t resort to this next year.

As I poured the kale into the salad bowl I discovered that much of it was rotten and moldy.  Ugh!  Such a waste.  And worse–it was the main feature of my dinner for the night.

Realizing there was nothing to salvage in that bag, I took the whole thing out to the compost and tossed it in.  While out there I glanced over to some lettuce I had put in on a whim last month.  It looked good!  I pulled it out.  Then, I went in the house for a few supplies and came back out to find other things for the salad.

I ended up with a delicious combination of romaine lettuce, baby kale (2 kinds), arugula, chives, radishes and pea tendrils.  This mix was so far superior in flavor and freshness to that sad bag of kale that I immediately realized (once again) how amazing a garden can be.  This was actual green food.  Not some trucked-in greenish food that was picked three weeks ago and put in plastic. 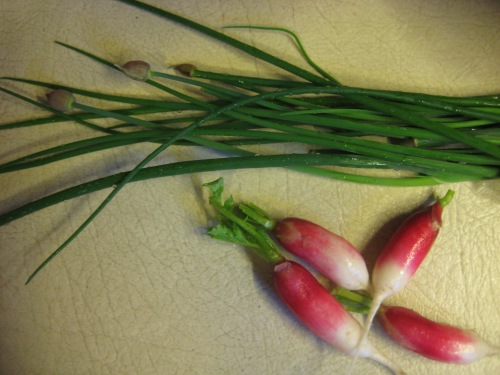 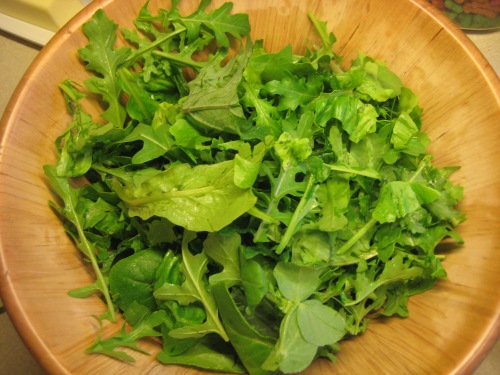 The beautiful blend of greens! 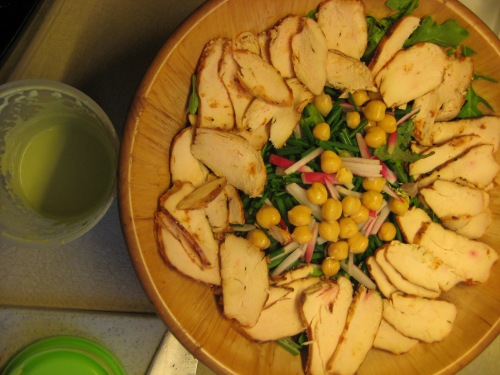 Salad with chicken, chickpeas, chives and radishes added. To the side you can see the homemade ranch dressing.

You didn’t think I’d forget dessert did you?  I went out in the light drizzle of rain today and happily harvested some rhubarb to make the pie my six year-old had requested. 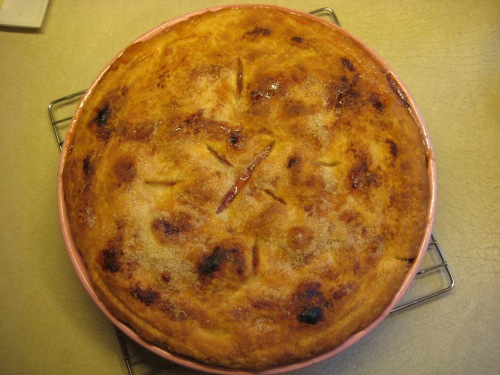 There were a few things I wanted to share regarding tonight’s meal.  The first, is that my kids wanted to play a game in which I told them to look for a certain thing and they would find it and eat it.  So I would say, “Find the arugula!” and they would find one and excitedly hold it up to show me.  They got the idea to do this because I told them there were seven things from the garden in the salad, they wanted to find each one.  For once they were happy that I let them “play” with their food.

Second, the ranch dressing we had tonight was leftover from my son’s first birthday party this past weekend.  It went over BIG TIME with the crowd, so I thought I’d share a link to the recipe with readers in case you were looking for something new to try.

There’s even a video of her making the dressing.  Check it out!

And finally, I just want to encourage anyone who may be reading this to try planting  a little something.  You don’t need to have seven things available to go in a salad in order to grow your own food.  One thing in a pot is good too!  In this day and age when we don’t know who grew our food or where it was grown, there truly is insurance in knowing that you grew something–anything.  It’s good practice to plant something if you can.  So, give it a try this season.  And may God bless your garden!

The garden and the farmer’s market are still loaded with lots of goodies.  I have two favorite recipes I like to make in October that use ingredients that are super fresh right now.

Celeriac, also known as celery root, has a flavor similar to celery but comes in root ball form rather than a stalk like celery.  It’s pretty ugly out of the garden, but so great in a fall soup.  And I’m happy to report it’s a cinch to grow. 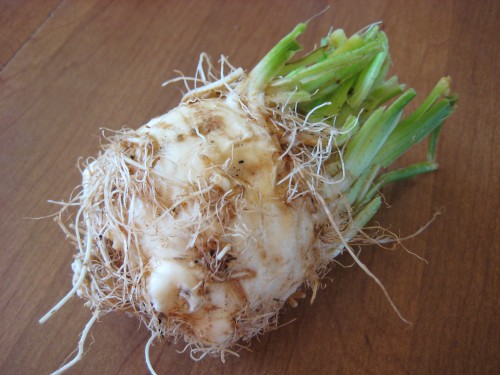 This is what the celeriac looks like after I've significantly cleaned it, but not yet peeled it.

I first discovered celeriac in a CSA box a few years ago, wasn’t sure what to do with it at first.  It’s delicious in a slaw or roasted, but my favorite way is in a soup.  Google “celery root soup” and you’ll find a slew of simlar-ish recipes from the likes of Oprah to the folks at Joy of Kosher.  There are literally hundreds of great recipes at the push of a button.

I’m sharing an un-recipe… in other words, this is how I make it but I don’t really measure and sometimes I throw in other stuff.  But it’s a method that works and is always good. 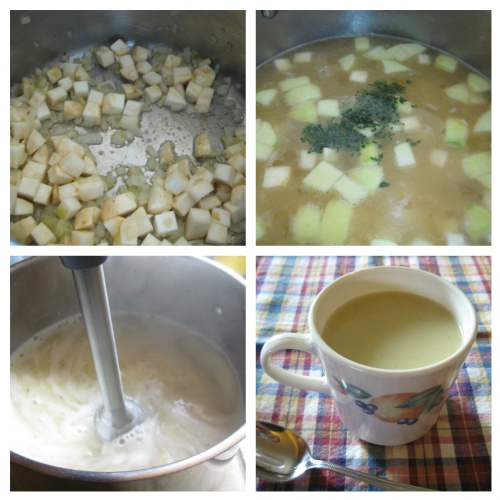 In a pot, saute cubed celeriac (celery root) and diced onion in a bit of butter or olive oil.  When lightly cooked, add diced potato, diced green apple, a large container of chicken broth, and fresh herbs (such as rosemary, thyme or tarragon).  Bring to a boil, then set to simmer for 30 minutes or until vegetables are cooked through.  Using an immersion blender (or whatever blending device is available) blend soup in batches until smooth.  Return to pot, reheat and season with salt and pepper to taste.  A drizzle of olive oil and a few croutons make a great garnish to this bowl of fall flavor.

The second recipe I’m sharing is for a rich and creamy carrot soup that utilizes carrots, onions, potato and rosemary from the garden or farmer’s market.  I love this soup on a chilly fall day with some crusty bread.  Very comforting.  I’ve made it without the cream before and since the potato adds a starchy creaminess, it is also good that way.   Though I admit I prefer it with the cream, it’s just so delicious.

In a 5-qt. Dutch oven, saute onion in butter until tender.  Add carrots, potato, broth and ginger.  Cover and cook over medium heat for 30 minutes or until vegetables are tender.  Cool 15 minutes.  Puree in small batches in a blender or food processor until smooth.  Return all to the saucepan; add cream, rosemary, salt and pepper.  Cook over low heat until heated through.  Yield: 6-8 servings (2 1/2 quarts) 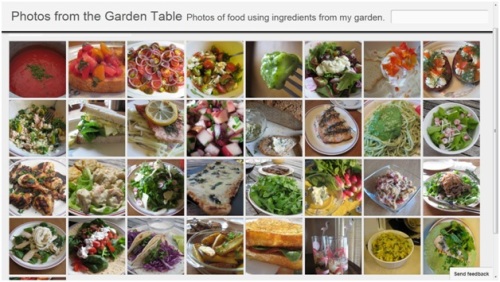 I documented many of the meals I made this year using ingredients from my garden on another blog called Photos from the Garden Table.  As you can see from the screen shot above, there was a lot of color on our plates!  It’s fun to look at it from this perspective.  If you click over to the blogger site you’ll be able to read what each item is and which garden ingredient was used.

The first thing to be harvested from the garden each year are vibrant green chives.  I love to see these poke through the ground, sometimes they even make it through the snow. 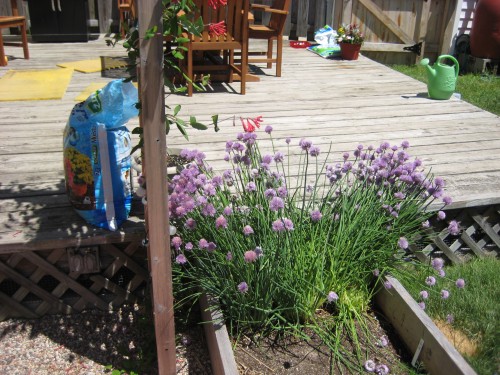 Flowering chives are a very pretty element of the herb garden.

My favorite uses for chives include:

on scrambled eggs
in a salad
on potatoes, rice or any grain
on tomato slices
in a condiment buffet for nachos, tacos or other Mexican fare
sprinkled over grilled meats

My kids like to grab a chive while playing in the yard and snack on it.  I do that same thing once in a while!

It’s easiest to snip the chives with a kitchen scissors.  This is also the tool I use to harvest them out of the garden.  I cut them about an inch from the soil.  They continue growing, so I can cut fresh chives for the entire growing season and never run out.

This week I made Smashed Chive Potatoes from a recipe I clipped out of the newspaper in 2005–before I even grew chives.  I just knew I’d have a garden someday and was always clipping out recipes to use in the future.  Now I have a virtual library of clippings.  It’s a bit chaotic, but also fun, to go rifling through the recipes and I feel so happy when I come across just the right one.

The recipe does not exist online (that I can find) so I’m sharing it here.  I really enjoyed it!  And my family did too.

Cut potatoes into quarters.  (Don not peel.)  Boil until tender, about 15 minutes.  Drain and pat dry with paper towels.  Mash by hand or lightly with mixer.  (Do not overmix, or else potatoes will become gluey.) 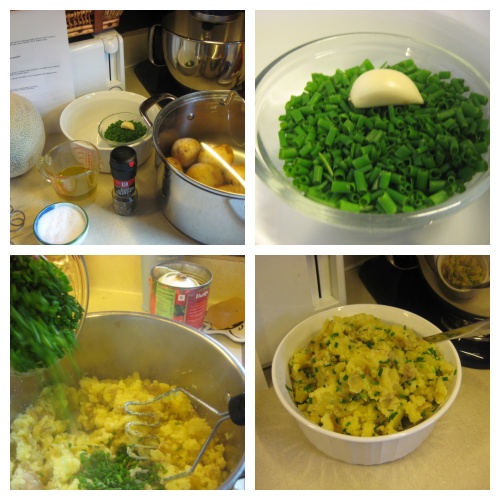 This is a one pot smashed potato recipe that makes tasty use of fresh chives.

Posted in Garden to Table, Herbs

It’s the second to last day of March (a month that was more lion than lamb) and I’m kicking off my Garden to Table series with two delicious side dishes.  I have, in fact, harvested some parsley and basil from my indoor garden.  While they are a drop in the bucket of what will inevitably be an herb filled growing season, they are so very welcome!  I’m thrilled to share this dish with you as it is absolutely delicious. 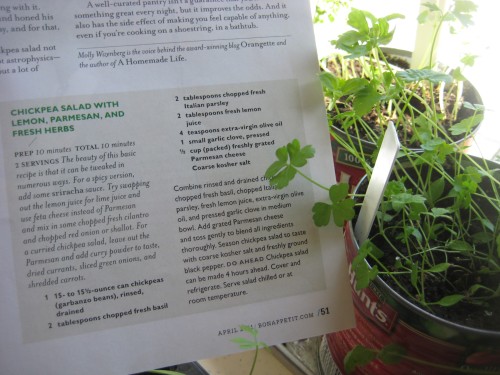 Bon Appetit readers will recognize this recipe from the most current issue of the magazine, April 2011.  I couldn’t resist such a simple but satisfying example of how even the most meager use of fresh herbs can dress up something like a chickpea in way that makes it sing. 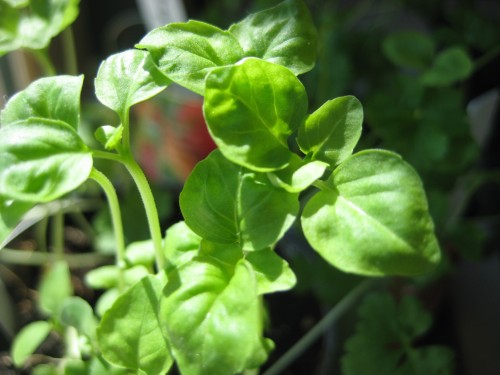 Basil leaves of the bush basil plant I started in February.

Parsley, plants are still small but there are enough leaves to add flavor to this dish. 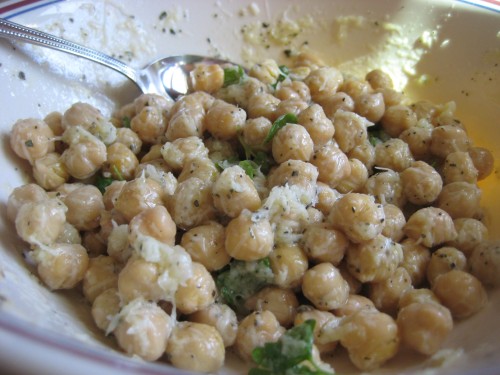 Who knew chickpeas could be so satisfying? Notice how the fresh herbs punctuate this dish.

Here is where you can find the chickpea recipe:  Chickpea Salad with Lemon, Parmesan and Fresh Herbs.

The second item I used today from my garden was carrots.  Carrots?  In March?  Why, yes.  It’s a fact that carrots, if stored properly, can remain sweet, crispy and fresh for months… in this case half a year.  I only had a few left so I shredded them and put them into a crunchy Asian style coleslaw.  I learned to make this coleslaw using a Betty Crocker cookbook.  It works every time, even when I’m missing an ingredient here or there.  Today I was short the green pepper, so I just left that out.

There’s no reason a gardener can’t infuse dishes with homegrown goodness year round.  It requires planning, but not so much to be an inconvenience.  And sometimes serendipity plays a role as well.  Things just fall into place once in a while and an ingredient presents itself at just the right time.  (I didn’t remember I had those carrots!  But I was sure happy to find them this morning when trying to figure out what to do with half of a cabbage.)

Since Betty doesn’t share her coleslaw recipe online, I’ve typed it out for you here.  It’s so good!

Happy Cooking!  And don’t be shy if you have recipes or ideas to share throughout the season.  I welcome links to recipes in the comments area or at my Twitter account @AGraciousGarden.